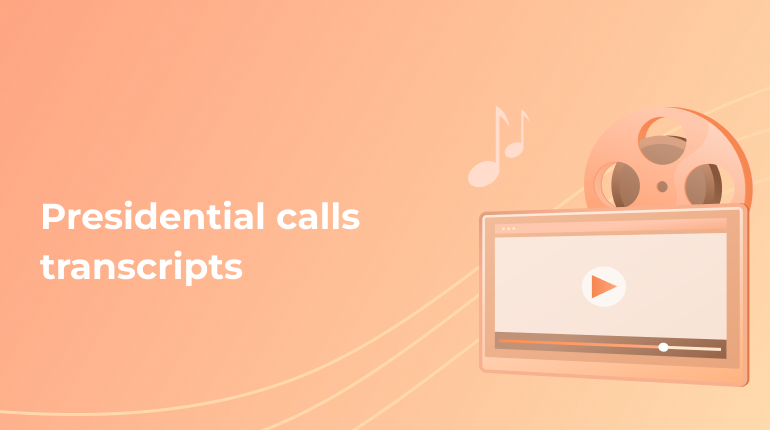 What is transcripts of presidential calls?

The transcripts are released by the White House as part of its efforts to be transparent. They are typically released after the call has taken place, and they often include information about what was discussed.

How is a presidential phone call organized?

The Situation Room is contacted when someone makes the decision that the president needs contact a foreign head of state. Several members of the senior director’s staff are on hand to assist with the president’s call.

The objective is to ensure that the president is informed about the purpose of the call and what had to be mentioned, as well as what should not be said.

The president is given a sheet of talking points to help him guide the conversation. This sheet includes information about the other person on the call, as well as what topics should be discussed.

Once the call is over, the transcript is created based on notes taken by someone who was listening in on the conversation.

How is a president’s phone call documented?

The Situation Room continues to monitor the conversation and ensure that it maintains a high level of quality. They also create the first rough transcript of the call. Two to three officers produce this document, which is under review at the time.

The duty officers are all wearing headphones and a few of them are rapidly typing out everything they hear. The third person uses a slightly different method where they use a headset with a microphone in order to record the conversation. The president or head of state is not recorded by audio.

The transcript is then released to the public by the White House. It is not an exact word-for-word account, but it does include the most important points from the conversation.

The transcripts of presidential phone calls are made by White House staffers who listen to the call and take notes. These notes are then turned into a transcript, which is then released to the public.

How accurate are the transcripts of president’s calls?

How are the presidential transcripts checked?

The transcript is produced by the White House and is then provided to the directorate of the National Security Council responsible for the call. That transcript becomes the memorandum of the phone conversation. The transcript is then reviewed by staff in the national security adviser’s office. Any changes in the transcripts are possible, but not welcome.

All parties inside and outside the White House are given a copy of the transcript. Although less than a half-dozen White House officials may really hear a presidential phone conversation, the transcript is provided to them.

How are the transcripts of a presidential calls classified as secret or top secret?

What happens if a transcript is stamped ‘top secret’?

A “top secret” classification means that only people with the highest level of clearance in the United States can view the material. The following transcripts are made available through a system known as Jwics, which stands for Joint Worldwide Intelligence Communications System and is a worldwide network that individuals in the intelligence business use.

“Secret”, but not “top secret”, means that government officials may more readily discuss the contents of the presidents’ conversations with others who work in the federal government.

What are some benefits of transcripts of presidential phone calls?

Transcripts of presidential phone calls provide insight into the president’s thinking on a variety of issues. They can also be used to hold the president accountable for his actions and statements. The transcripts can be a valuable resource for journalists, scholars, and the general public.

What skills do you need to become a professional transcriptionist?

In order to become a transcriber, you will need a combination of technical skills, soft skills, and equipment. Although it may seem fairly simple to listen to a recording and type out what you hear, it is more challenging than you might think.

If you want to level up in your career and get paid better, seek out transcription training in a specialized field. As you move up the ladder, you will probably want to upgrade to better equipment, too.

Some of the technical skills you will need include:

How much time do you need to be a professional?

If you have the necessary skills and equipment, you can start transcribing audio files immediately. However, it may take some time to get up to speed with the different dialects and accents you will encounter. In addition, if you want to transcribe in a specialized field, it will take some time to learn the jargon and technical terms used in that field.

Depending on your skill level and whether you want to specialize, it can take anywhere from a couple of weeks to a couple of years to become an expert and work for a professional transcription service with high salary.

Need a high-quality transcript of any document?

Work for Transcriberry as professional transcriber

Are you looking for a challenging and exciting career? Do you want to work from home and enjoy the flexibility of being your own boss? If so, then working as a professional transcriber might be the right career choice for you.

At Transcriberry, we are always looking for transcriptionists with a wide range of skills and experience. We work with transcribers from all over the world, so no matter where you are located, we may have a job for you.

If you are interested in working as a transcriptionist, please contact us. We would be happy to discuss your experience and qualifications, and see if we have a transcription job that is a good match for you.